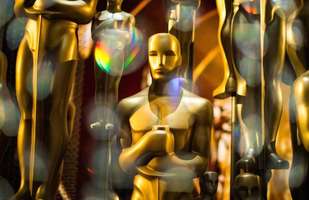 A former employee of the Academy of Motion Picture Arts & Sciences has brought a discrimination lawsuit against them for allegedly refusing to comply with his doctor's instructions and requests for him to work from home.

Cancer treatment is a difficult enough process, but the financial aspect of the disease takes a major toll on a patient's well-being as well. Studies have shown that after a cancer diagnosis, there are two major concerns during survival: care and paying for the care. 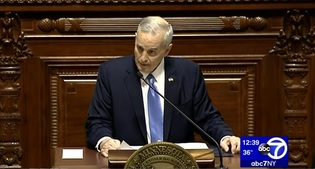 Minnesota Gov. Mark Dayton revealed his prostate cancer diagnosis on Tuesday, hours after collapsing during the delivery of his State of Address on Monday night. Dayton tried to keep the incident light, saying it was a brief episode and joking, "had I known it would result in Republicans not criticizing my speech, I might have tried it years ago!" 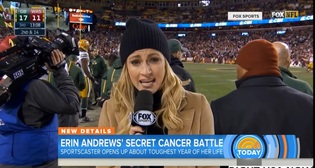 Erin Andrews wears many hats; she's a Fox NFL reporter, a host of "Dancing with the Stars" and now, a cancer survivor. In June 2016 Andrews went for a routine check up and was asked to come in for some additional tests. She thought nothing of it until a few months later she was told she had cervical cancer and would need surgery immediately. 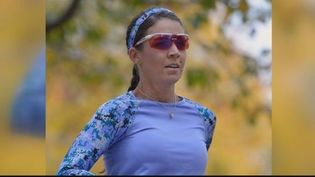 FoxNews: Athlete with brain cancer to run 7 marathons on 7 different continents in 7 days

Over a decade ago, BethAnn Telford received her brain cancer diagnosis after recognizing signs during the Marine Corps Marathon. Feeling a huge pop in her head at mile 19, Telford knew something was wrong. 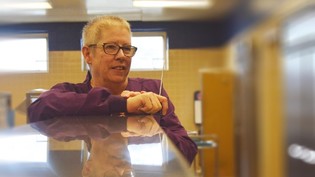 Pam Adams, a North Carolina school cafeteria lady, has continued to work despite her September diagnosis of Stage 4 lung cancer. Adams says that continuing to work has less to do about labor and more about living.

Though her cancer diagnosis was unexpected and difficult, things also moved fast for Lauren Flaherty. From diagnosis to surgery in 31 days. 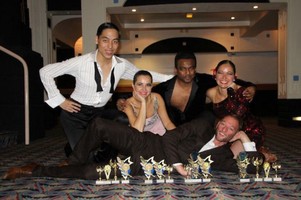 Top choreographer and international dance star, Thomas Michael Voss, is determined to not let cancer get in the way of his work. Voss had been preparing for a ground-breaking performance at the Resolution dance festival when he was diagnosed with plasmablastic lymphoma. Midway through his chemotherapy treatments, Voss is now getting back to work 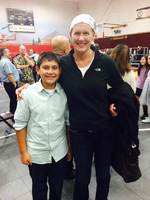 Los Angeles Police Department Commander, Anne Clark, is the first Hispanic woman to hold that job title in the force. In August 2014, doctors diagnosed Clark with stage-1 Hodgkin's lymphoma. After four months of chemotherapy and follow-up radiation therapy, Clark has been in remission ever since – and is enjoying her new job title! 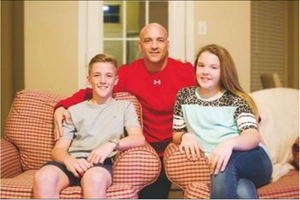 After a series of unfortunate events during the last six months, Steven Lemley, football coach and teacher, is now happy to be back at work. Steven, a single father to children ages 14 and 11, was diagnosed with adenocarcinoma laryngeal cancer in August. Just six months later, his house went up in flames - losing everything he owned. 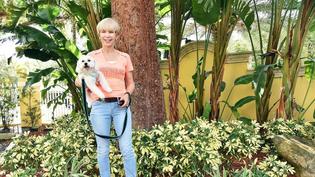 Becky Miller, a 58-year-old cancer survivor didn't allow her personal tragedies to stop her from pursuing her dreams. Miller recently earned an associate of science degree, with a 3.87 GPA, and will be moving on to Florida Atlantic University to pursue sociology next semester. 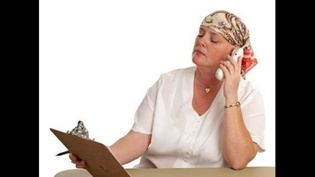 There is no 'one size fits all' treatment plan for cancer patients. While some find it impossible to work, for others it may be possible. Some find the normalcy of work provides a routine and a strong sense of purpose. That is not to say it does not come with some challenges. 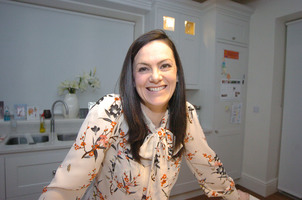 Meath Chronicle: After cancer there's no getting back to normal, you need to find a new normal

Niamh Gaffney's life was going just as she had planned in 2012 when she welcomed a baby girl and had a successful career in the financial sector. However, much of that changed when she found a lump in her breast and was diagnosed with Triple Negative Breast Cancer.

AJMC: Employers express their concerns with cancer care at the COA summit

At the recent Commonity Oncology Alliance summit, much of the discussion focused on the role of employers in their employees cancer care and experience. More and more employers and healthcare professionals are recognizing the challenges that come with cancer as it relates to the workplace.

A recently revised law in Japan now provides the necessary support for cancer patients, so that they may continue to work or study while receiving treatment for cancer. There is a call for companies to make arrangements that enable people to find employment or continue working even if they're diagnosed with cancer. 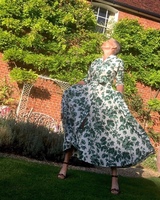 Huffpost: I overcame cancer, and now I'm taking on Mount Kilimanjaro! 2017 will be my year

Julie English describes her cancer experience and how she dealt with being someone constantly on-the-go and active, both physically and at work, to finding out she had cancer. English decided she was not going to let cancer prevent her from one of her passions, exercise.

Veronica Solis, a daycare cook, was moved to tears when her boss surprised her with a new car. The reason? Loyalty and commitment to her work at Kids' College Learning Center at Texas.Despite a diagnosis of cancer, Solis managed to come to work through her treatment. Recently, however, she's been showing up later. 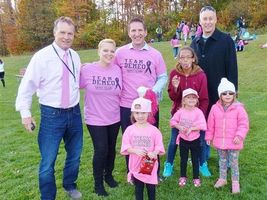 Kim DeMeo, an English teacher at West Orange Liberty Middle School, returned to work in September following a year leave of absence in which she had underwent multiple surgeries and rounds of chemotherapy. 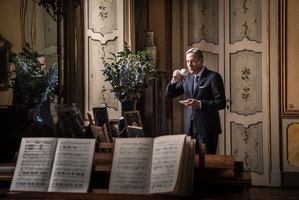 NY Times: Howard Schultz to step down as Starbucks chief next year

Visionary leader of Starbucks, Howard Schultz, has announced his plan to step down as chief executive next year and will be handing over management to his personally selected successor, Kevin Johnson. Johnson, a cancer survivor, is a longtime Starbucks board member and close personal friend to Schultz. 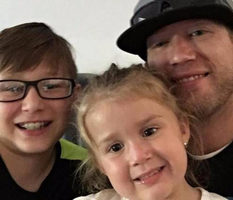 After experiencing frequent headaches, Damian Jay decided to go to the doctor. He was told the unfortunate news that he had a brain tumor and it was cancerous. Jay experienced a major bout of depression from the news, but tried to stay positive. 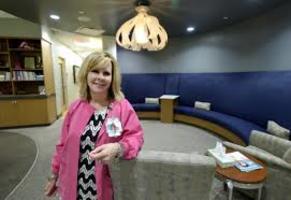 The Ledger: Cancer survivor is now 'chief hand-holder and purveyor of hugs and hope'

Kristi Evans was working as a kindergarten teacher when she got the fateful call that she was diagnosed with breast cancer. The diagnosis led to a mastectomy, follow-up surgeries and chemotherapy, but perhaps most notably to Evans, a career shift.

In 2003, Don Wright completed his first marathon, which he thought would also be his last. Shortly after his lower back pain was diagnosed as multiple myeloma, and he was told he'd have less than 5 years to live. Thirteen years later and at age 75, Wright has just completed his 100th marathon, with no signs of slowing down. 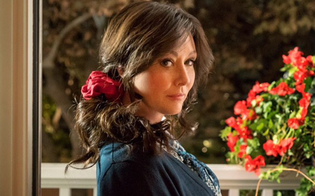 Shannen Doherty has made no secret of her current battle with breast cancer. She has allowed the public to see some of the toughest aspects of her cancer treatment. However, news has come out that she has been cast in a TV reboot of the 80's movie 'Heathers'. 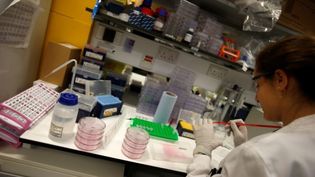 According to a recent study, regardless of social and economic status, having a child with cancer is often tied to income reductions for parents and job discontinuation for mothers. Researchers studied over 3,000 parents of nearly 2,000 children diagnosed with cancer, and compared those parents to nearly 35,000 parents from the general population. 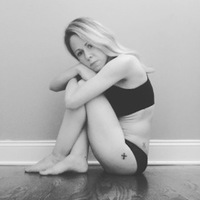 Rare Disease Report: Dear every cancer patient I ever cared for - I'm sorry

Lindsay Norris is an oncology RN who has been working in oncology for years and has recently come to the realization that she never truly appreciated the gravity of a cancer diagnosis and the subsequent treatment. 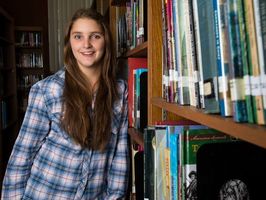 Jacqueline Elena Black was diagnosed at age 6 with anaplastic astrocytoma, a rare brain cancer. After years of treatment, including a brain surgery that removed her entire left cerebellum, Black was still given a poor prognosis for survival. Now at 17, she's proved all of the doctors wrong. 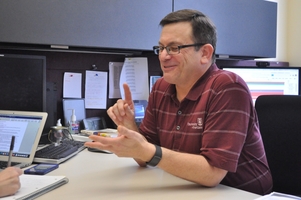 The Beacon: A cancer survivor with a black belt: Meet Professor Gary Mitchell

Gary Mitchell is a three-time cancer survivor, but you wouldn't know it off the bat. Mitchell holds a black belt in two types of martial arts, plays the saxophone in two bands, and is an Operations and Technology Management professor who's been teaching at UP Beacon since 2005. 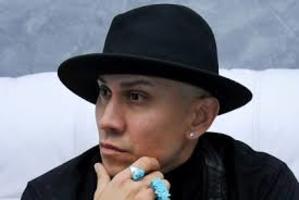 People: Taboo's private health crisis: How he beat cancer out of the public eye

Jamie Luis Gomez, better known as Taboo from the group the Black Eyed Peas, has recently decided to share his battle with testicular cancer. With the support of his real family and his musical family, he underwent surgery and 12 rounds of chemo. 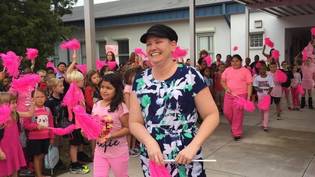 Though Jill Bass, 35-year-old third grade teacher, planned to have a quiet leisurely first day back after being on leave to recover from surgery for breast cancer, she was greeted in quite a different fashion.As she arrived, Bass was greeted by a sea of pink and a school-wide rendition of Rachel Platten's "Fight Song."

The Conversation: We need more support for people who want to work during and after cancer treatment

Aside from the obvious benefits of working--an income--there are certain aspects of working that are in some ways equally important. Working helps to preserve a sense of identity and purpose, particularly through a rough time. Additionally the social interaction can provide a sense of normalcy that a cancer diagnosis can often derail.