Cancer Today interviewed Kim Hall Jackson, an event planner and colorectal cancer survivor, who uses her skills as an event planner to promote cancer screening among African-Americans. She was also a travel scholarship recipient for our 2014 National Conference on Work & Cancer!

Jackson was diagnosed with colorectal cancer and underwent surgery, chemotherapy and radiation. She managed the side effects of these treatments (nausea, diarrhea and exhaustion) as she worked full time during treatment.

Her event planning mindset also helped her get through her cancer treatment. On pushing her doctors recommendations and wanting to have her ileostomy reversed, she said, “That’s the event planner in me. Things need to happen in a sequential order. I needed to complete that sequence and then begin the next step.”

Since finishing her treatment in 2009, she has not shown any evidence of cancer, but she is still dealing with long-term effects of cancer, such as having unexpected bowl movements. To cope with this side effect, shes learned to adjust her eating routine on days she has to work an event.

'Teitelbaum, Jackson’s oncologist, says she’s impressed with how Jackson manages the aftereffects of treatment. “You wouldn’t know day to day what her life looks and feels like,” she says. “But she knows every day that it’s not like it was before.”'

Our Chief Mission Officer, Rebecca Nellis, was also featured in the Sound Advice column of this issue - weighing in on what to tell an employer when you decide to work through treatment. Click here to read more! 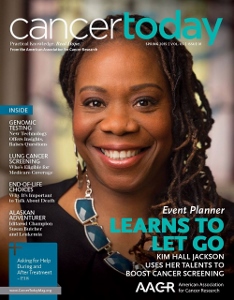